I asked this question a while back: Stop MacBook from using up the battery while it is in sleep mode. And never got to the bottom of it.

I keeps happening, that I put my Mac in sleep (on a full battery), and bring it with me on a train or something – and on that day, the battery-Gods had thrown a curse on me: 10% battery left. SIGH!!

Overarching question: In order to debug this, I'm looking for a way I can figure out, which applications used (the most) energy for the past 12 hours (or so).

I know that it can be misleading, since maybe Chrome spend the most energy/battery, but it was my Docker-service that stopped my Mac from every sleeping (while barely consuming any energy/battery).

Bonus points if you can give me a terminal-command to run for: ‘Kill everything that is stopping my Mac from going into proper sleep'.

I can see that there are some information in the Activity Monitor. Such as the column called: 12 hour Power. I assume that is what I'm looking for.

It told me that ‘Spotlight' consumed 73% (in the 12 hour Power-column), the last time this happened. Hmm…

I tried looking for a program or a terminal-command, that would get me some extra insight. But I couldn't find anything (that didn't look shady).

I read this article here: How to Choose a Sleep Mode for Your Mac, which was good for my understanding, but not revolutionizing anything in my quest here.

The biggest difference after that article was, that I know more about when to use ‘Screen lock': 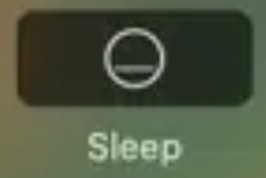 By writing: pmset -g I got some extra info. But nothing that I could use for this particular case:

As can be seen there, it says: (sleep prevented by nfsd, sharingd, useractivityd).

By Googling sharingd I can see that that is used by AirDrop. I read about sharingd – and then disabled AirDrop.

I don't know what this is. But it disappears by itself, if I simply run pmset -g again and again.

This I know quite a bit about, since when I played with Vagrant. It's the Network File System Daemon. One can read more about it with the command: man nfsd.

I stopped that with: sudo nfsd stop (it can be started simply with a reboot or with: sudo nfsd start). It's what handles sync'ing of files to a Vagrant Virtual machine – and maybe also to a Docker container (I'm assuming the last bit here).

After having gone through this, then pmset -g doesn't display any programs nor daemons ‘preventing sleep'.

So now I'll try, if I know that battery will be important, to run pmset -g and see if any service is preventing sleep (and also checking that column in the Activity Monitor). And trying to kill those applications first.

But I would still love to get some graphs over which applications used how much energy/battery, of the past X hours.