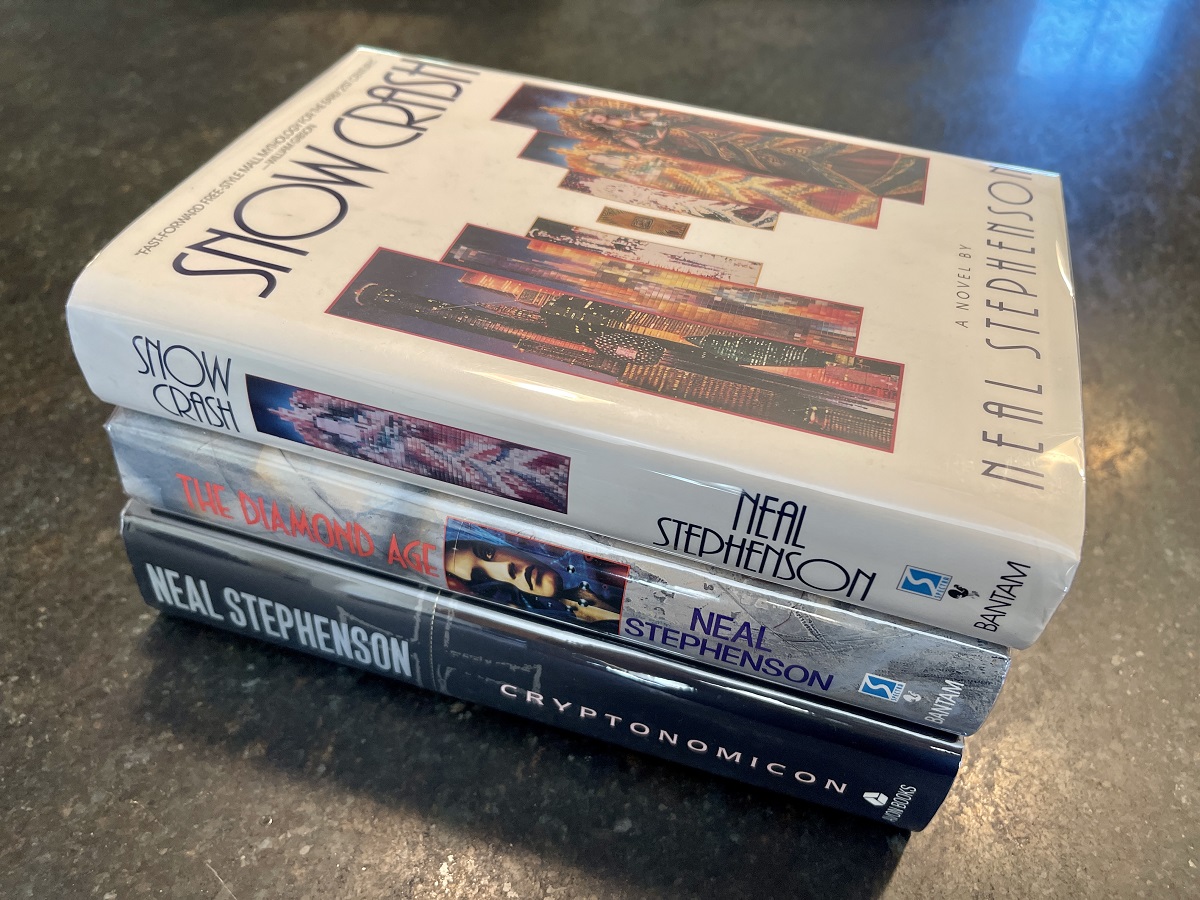 We’re excited that our special guest speaker for GamesBeat Summit Next 2022 on October 25-26 in San Francisco will be Neal Stephenson, author of the novel Snow Crash and the science fiction thinker who first coined the term metaverse.

This is a dreamy day for us geeks at GamesBeat, but it’s also relevant to the world, as Stephenson is cofounder of the blockchain gaming platform startup Lamina1. And he has also become an advocate for the open metaverse, as it looks like the metaverse is going to graduate from sci-fi to reality. In fact, McKinsey estimated the metaverse will be worth $5 trillion by 2030.

Waves of hype always crash into the game industry, but we never know if they’re going to get our feet wet or be tidal waves that change the whole industry. GamesBeat Summit Next 2022 will examine the next big opportunities in a disciplined way with the industry’s thought leaders. You can use the discount code Dean50 to get 50% off the ticket price for a limited time.

You don’t want to get FOMO about our event on the emerging parts of gaming that could turn into the next big markets. Our major subthemes will focus on key areas and how they will grow in the post-pandemic world. Those subthemes include the metaverse, user-generated content and the creator economy, influencers and the upheavals in marketing, nonfungible tokens and cryptocurrency, emerging markets, subscriptions and cloud gaming and the changing infrastructure of games. And as always, we will look at deal-making and the financial trends in gaming.

Many of us think of this stuff as science fiction, as the metaverse is the universe of virtual worlds that are all interconnected, like in novels such as Snow Crash. It’s no different from Marvel’s Multiverse, right?

Well, our session at the October 25-26 San Francisco event will be entitled “From science fiction to reality: Bringing the open and real-time metaverse to life.” Stephenson coined the term “metaverse” back in the 1990s when it was a science fiction vision for a digital world where we could fully immerse ourselves in a virtual experience. Now we are much closer to turning that vision into a reality. But how do we do it so it can be as equitable as possible for independent creators and developers? We’ll talk about the requirements of an open metaverse and the technologies, policies, and content to make it happen in a way that befits our collective imagination.

Stephenson is a best-selling author, futurist and visionary. Known for his works of speculative fiction, Stephenson has written on topics ranging from science fiction to technology to mathematics to philosophy over the last five decades.

Stephenson grew up among scientists and engineers in Midwestern college towns. After studying physics and geography at Boston University, he penned his first novel The Big U, a campus satire, published in 1984. Four years later, he published Zodiac, a thriller about an environmentalist’s fight against corporate pollution. In 1992, Stephenson would achieve his breakout moment with Snow Crash, a cyberpunk novel most known for creating and coining the term “metaverse.”

Now a critically acclaimed New York Times million-selling novel, Snow Crash is a must-read for many of the greatest minds in business and technology today. His subsequent novel The Diamond Age went on to explore the possibilities of distributed payment systems in a worldwide media network, and won the Hugo and Locus Awards in 1996.

In 1999, Stephenson went on to publish Cryptonomicon, a novel exploring everything from codebreaking and cryptography during the Second World War to what a modern “data haven” or unregulated data server might look like in the future. Cryptonomicon went on to win the Prometheus Hall of Fame Award and is frequently credited with inspiring a generation of cryptocurrency pioneers. Outside of writing, in the early 2000s, he became the first employee at Jeff Bezos’ space flight company Blue Origin, where he spent nearly seven years. While at Blue Origin, he worked with a small team of physicists and engineers to evaluate alternate approaches to space travel and propulsion systems.

Between 2003 and 2013, he went on to publish several additional novels as well as various shorter nonfiction pieces. His 2015 novel Seveneves appeared on the summer reading lists of Bill Gates and Barack Obama. In 2014, Stephenson was hired as the chief futurist at Magic Leap, the world’s leading spatial computing company. There he ran a content R&D squad that developed new augmented reality experiences. In June 2021, Stephenson and several colleagues released New Found Land: The Long Haul, an Audible audio drama based on the world they developed at Magic Leap. After departing from Magic Leap in 2020, he received an Epic MegaGrant to fund a virtual production project based on ideas from The Rise and Fall of D.O.D.O., a 2017 novel he co-wrote with Nicole Galland.

Thirty years after Snow Crash was first published, Neal partnered with crypto pioneer Peter Vessenes to finally bring his idea of the Metaverse to life. In June of 2022, Stephenson launched Lamina1, a Layer-1 blockchain purpose-built for the Open Metaverse, where he now serves as cofounder and chairman.

Mark Pincus, the cofounder and former CEO of Zynga (acquired by Take-Two Interactive earlier this year for $12.7 billion), pioneered social games and virtual goods to help establish gaming as a mass-market activity.

During Pincus’ run as CEO of Zynga, the company rode the wave of social gaming on Facebook and then made a somewhat rocky transition to mobile. Under his tenure, the San Francisco company came up with big hits like FarmVille, CityVille, and FrontierVille. That netted it more than a billion players, and it showed that a company could reach far more people than the hardcore gaming companies of the time could.

We’ve named a number of other speakers as well. They include Umesh Lakshman, head of solutions architecture, West, media and entertainment at Lumen. He will talk in a session about the journey to build the real-time metaverse

We’ve also got Uri Marchand, CEO of Overwolf, on a session about the future of user-generated content with Enrico D’Angelo, vice president of product, economy & ecosystems at Roblox; and Ada Duan, general manager of growth products and partnerships for Mojang Studios.

We’ve also got Sim City creator Will Wright, now cofounder of Gallium; and Matthew Ball, CEO of Epyllion and author of the popular book, The Metaverse.Wright will talk about his new startup, Gallium Studios, and his views of gaming in a fireside chat with Peter Levin, managing partner at Griffin Gaming Partners, while Ball will expand upon the open metaverse.

Neville Spiteri, CEO of pioneering virtual reality firm Wevr, will speak about the tools for the next-generation of game development. They’re among the best seers in the industry with a track record of excellence. Renee Gittins, general manager of Phoenix Labs and former executive director of the International Game Developers Association, will be part of an interesting panel entitled Soft Skills for Hard Problems. She will be joined by Aleissia Laidacker, mixed reality expert and head of product and technology at Open Meta Association.

Other panelists include Yaprak Decarmine, CEO of Game Jolt; Lauren Hetu, senior software engineer, Phoenix Labs; and Zak Whaley, director of engineering at PlayEveryWare. These speaker illustrate what we can learn from thinkers who are solving modern problems in different ways.

Susan Bonds is CEO of 42 Entertainment.

We’ve also got a good series of sessions on the rise of user-generated content, spearheaded by modding platform company Overwolf. The speakers include Overwolf’s Marchand as well as Shahar Sorek, chief marketing officer of Overwolf.

Brooks Brown, founder of Consortium9, will also enlighten us about the right way to think about blockchain, and Umesh Lakshman, head of solutions architecture West, media and entertainment at Lumen, a tech infrastructure company that is preparing for the real-time metaverse. We’ve also got Susan Bonds, CEO of 42 Entertainment, a maker of alternate reality games, and her new work in AR at Animal Repair Shop.

These are just the initial set of some amazing speakers that we have lined up for the event, which will be held in person at the Midway in San Francisco on October 25-26. We’re curating an excellent experience with multiple tracks so that you can explore the emerging part of gaming that you care about.

Our target audience is the decision makers who will guide the way to a bigger and better gaming industry. The path through the recession won’t be easy, particularly as things aren’t growing as fast as they once were and high-flying areas like blockchain games have crashed. But we’ll have the right people to explain the most important trends in games so you can thread the way to growth.